If you’ve been following along with our tutorials for QuickTime Player for Mac (and we’re sure you have), you’ve been introduced to recording audio files, as well as recording and editing video files. For our final installment, we’re going to stick our landing as we show you how to create screencasts using your computer or connected iOS device. You’ll be creating your own video tutorials before you know it! Let’s get started, shall we? Yes, let’s.

What is a Screencast?

‘Screencasting’ is just a fancy term for recording your screen. Bloggers commonly use this technique to create tutorials or similar walkthroughs of screen content, typically while also recording audio as the presenter provides more detail for the viewer. (I may never understand why someone would want to watch a video of someone else playing a video game, but that’s another great example of screencasting.)

Creating your own screencast with QuickTime Player for Mac is a snap. Start by selecting New Screen Recording from the File menu. The Screen Recording window appears with the following elements: 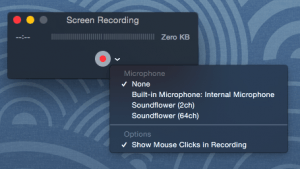 Selecting the inverted caret next to the record button opens the Microphone and Options selection menu. Just as when we recorded video in the last tutorial, the Microphone computer’s available microphones (audio inputs) are displayed.

The Options menu displays ‘Show Mouse Clicks When Recording,’ which is selected by default. With this option selected, a circle will appear around the mouse cursor in the final video, indicating when a ‘click’ or selection was made with the cursor. (This circle will not be visible during the actual recording…only on playback.)

Select the Record button. A box appears in the center of the screen with two recording options.

‘Click to record the full screen’ – Simply click anywhere inside the instruction box to begin recording the screen. The entire screen will be included in the recording. 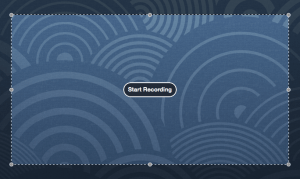 ‘Drag to record part of the screen’ – Use this option to record specific windows or areas of the screen. Only those areas included in the initial selection box will be recorded.

For either option, select the stop button (black square in a circle) located in the menu bar when finished. The recorded video appears.

You can also create a screencast of your iOS device (iPad/iPhone/iPod Touch), though the process differs slightly.

The biggest thing to keep in mind is that QuickTime doesn’t consider this a screen recording, as we outlined above, but rather a movie recording in which the iOS device is an attached ‘camera.’ It can be a little confusing to remember at first, but you’ll quickly get the hang of it. (Promise.)

To get started, make sure your iOS device is connected to your computer via its USB sync cable.

Ensure your device is running iOS 8 or later and that your Mac is running Yosemite (10.10) or greater before continuing. You won’t be able to select your device for recording, otherwise.

Select the iOS device from the Camera options menu. The screen of the device is displayed in the QuickTime Player recording window.

The QuickTime Player recording window will automatically adjust to the orientation of the device (landscape or portrait). 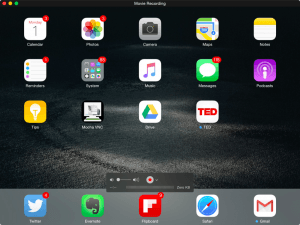 Select the record button to start the screen recording.

Click the stop button when finished. You may need to hover the cursor over the movie recording window to show the recording controls, as they will automatically hide after three seconds of mouse inactivity.

We went into detail in the last installment about how to edit your video recordings, and you can do the same with your screencasts. Need a refresher? Go back and check it out!

A Final Note About Audio…

While your computer’s built-in microphone will do the trick in most cases, we recommend some kind of external microphone when recording videos and screencasts. Sure, you can get a high-quality microphone and run it through a USB interface, but even budget-conscious options will make a huge impact on your final product. One simple solution is to use your standard Apple earbuds, as we’ve found that the earbuds’ microphone will pick our voice up better than the computer’s mic. 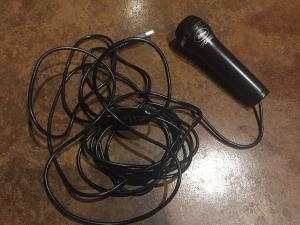 Another low-cost solution we always keep on-hand is game console microphone. You know those mics that came with games like RockBand or Disney’s Sing It? (Um, it was my daughter’s. I swear.) Well, those are typically Logitech USB microphones that will work like a charm in QuickTime Player. You can often find them at garage sales or thrift stores, so we recommend picking one up and keeping it in your bag of tricks.

So, we’ve shown you how to record audio, video and screencasts with QuickTime Player for Mac. We’ve also thrown in a few tips along the way, such as where to find a great list of compatible cameras or microphone solutions that won’t break the bank. But what do you think? Is QuickTime Player for Mac a tool you plan to add to your arsenal? Jump in the comments below and share your thoughts. If you have tips or tricks related to these tutorials, we’d love to hear them, too!

The Best Acoustic Guitar Under 500 Bucks? See our picks!

Related Articles
Let us know what you think!